Passport & Visa
A valid Passport with Entry Visa is required of all visitors. A Tourist Visa allows a stay of 28 days, extendable for an additional 14 days. A Business Visa allows a stay of 28 days, extendable up to 12 months on a case-by-case basis. Visa can be obtained through the Myanmar Embassy in your country or by applying for online e-visa approval via the Immigration website: http://evisa.moip.gov.mm/

Tourist visas are valid for 28 days and may be extended for another 28 days or less.

Customs
Jewelry, electrical goods and cameras must be declared at the airport. Antiques and archaeologically valuable items are not allowed to be taken out. Duty free allowance: two bottles of liquor; two cartons of cigarettes; 100 cigars; 1.5 lb of tobacco; one pint bottle of perfume or eau de cologne.

Foreign Exchange
Visitors may bring in any amount of foreign currency but it must be declared to the customs if it exceeds US$10,000.

Health Issues
Travel Shots (Vaccinations) No vaccination certificate is required to enter Myanmar, unless you are coming from an infected area. Normal travel “shots” are advised, please contact your local health department for more information.

Medicines
Bring enough of any prescription medicines you may be taking and make sure they are in the original prescription bottles with your name on it. General medicines to bring: As on any journey, it’s a good idea to carry some aspirin, ibuprofen, or similar pain medication; an anti-diarrhea medication, an antihistamine, a cold medicine, band aids, antibiotic ointment, etc. Some anti-bacterial wipes are always useful for cleaning hands in out-of-the-way places. Also ask your personal physician about which antibiotics to bring along and when to use them. Many parts of Myanmar are malaria areas, so ask your doctor or local health department as to which prophylactic to have prescribed. It’s also a good idea to bring along some bug repellent containing “Deet.” In case of any medical need during your visit, we will put you in contact with highly recommended physicians.

Clothing
Casual and light clothing is recommended, preferably natural fibers year-round, but bring a sweater or jacket for the higher hill areas, particularly during the winter months (November through February). A windproof jacket is a good idea when touring Inlay Lake during the winter months. A light raincoat is ESSENTIAL if you’re visiting during the monsoon months (June through September).

Dress Code
Remember this is a Buddhist country and always dress modestly. Shorts and tank tops for men and women should be avoided. When entering religious site and pagodas, it is required to removes shoes and socks. It is also customary to remove your shoes when entering someone’s home, so bring along shoes that are easy to slip on and off. You’ll notice that the Burmese generally wear thong-style sandals as they are very convenient!

Currency
The monetary unit is Kyat (pronounced “chat”). Foreign currencies can be exchanged at authorized money changers at the airport, hotels, and banks. Travelers are advised to bring crisp, new and unbent USD notes. Higher denominations of USD 100 and USD 50 get the best exchange rates. International credit cards and travelers checks are not widely used, except in major hotels and restaurants. The use of Visa Cards started in January 2013. ATM machines are available at the main cities but it is best to not depend on these.

Shopping
Myanmar is a shopper’s paradise as it is a country of artisans and cottage industries. Many visitors have found the need to buy an extra suitcase! There are unbelievable bargains in woodcarvings, hand woven silks and cottons, charming marionettes, lacquerware, tapestries, stunning ethnic clothing, gems, jade, the list goes on… When buying those famous Burmese pigeon blood rubies, gorgeous Burmese blue sapphires, any gem or jewelry, or hand wrought silver or gold, be sure to buy from a government authorized Myanmar Gem Shop where you will be given a voucher with a permit for export. When buying from unauthorized shops, you are buying stones and jewelry of a dubious quality that cannot be guaranteed.

Tipping
Tipping is widely practiced, so if a service charge is not included, tip for good service! Be sure to ask your guide the appropriate amount. It’s easy to forget the economic differences.

Security
Myanmar is not known for crime, and it’s quite safe to travel everywhere. The area of the Myanmar/Thai border is one area to exercise some caution, and also any area that is crowded or on trains and buses (like anywhere in the world). Keep your Passport and money in a safe place when in these situations. In the unlikely event of a loss, it must be reported to the nearest police station and embassy immediately.

Other Facts to Note
Water: Never drink the tap water, only drink purified bottled water. Bottled water is available everywhere and is generally provided in your hotel room. Our guides always have a good supply of bottled water with them.
Food : Food provided in major hotels in the major cities is usually safe to eat, but when in smaller towns and out-of-the-way places, or when in doubt, only eat hot cooked meals, and fruit that can be peeled (like bananas, pineapple, and oranges) It’s a good idea to avoid eating food from street vendors or market stalls however tempting it is. The hygienic conditions at those places are questionable. But do enjoy the famous Burmese cuisine! Burmese cuisine consists of rice or noodles served with a variety of side dishes. The Burmese curries tend to be less spicy than Thai versions. A delicious variety of regional foods are a culinary delight! Don’t be afraid to try something different. There are also plenty of opportunities to have Chinese, Indian, and Thai cuisine. 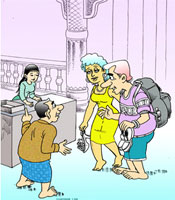 Wear decent clothes to the pagoda or monastery
Since pagodas and monasteries are considered as sacred you should only visit these places in clothings that are conservative and modest i.e not revealing such as see-through or low cut blouses, or tank tops. 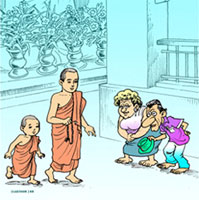 Show respects to monks, novices and nuns
In Myanmar, a monk is regarded as the most reverent after the Buddha and His Doctrine and should be respected. The monk observes the 227 rules of the Discipline, studies the Doctrine, practises meditation, is celibate, keeps fasting every day, leads a life of abstinence and minimum wants. A novice whose life is almost similar to that of a monk is dedicated to becoming a monk so he is also worthy of respect. A nun is a female religious person equally dedicated to a life of discipline and the study and practice of the doctrine. 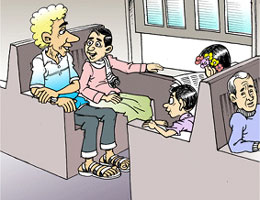 Keep the feet on the ground
Resting feet on a table, or another chair or a seat will offend Myanmar people. They regard the feet as the inferior part of the body and they should be kept as far away from other people as possible. 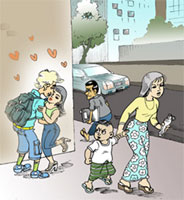 Don’t hug and kiss in public
Myanmar people are modest when it comes to shows of affection. They do not display body contact or physical closeness to loved ones of opposite sex in public places. Behaviour such as hugging, holding hands and lip-kissing is offensive to local people.
© Copyright Golden Rock Travel and Tours.